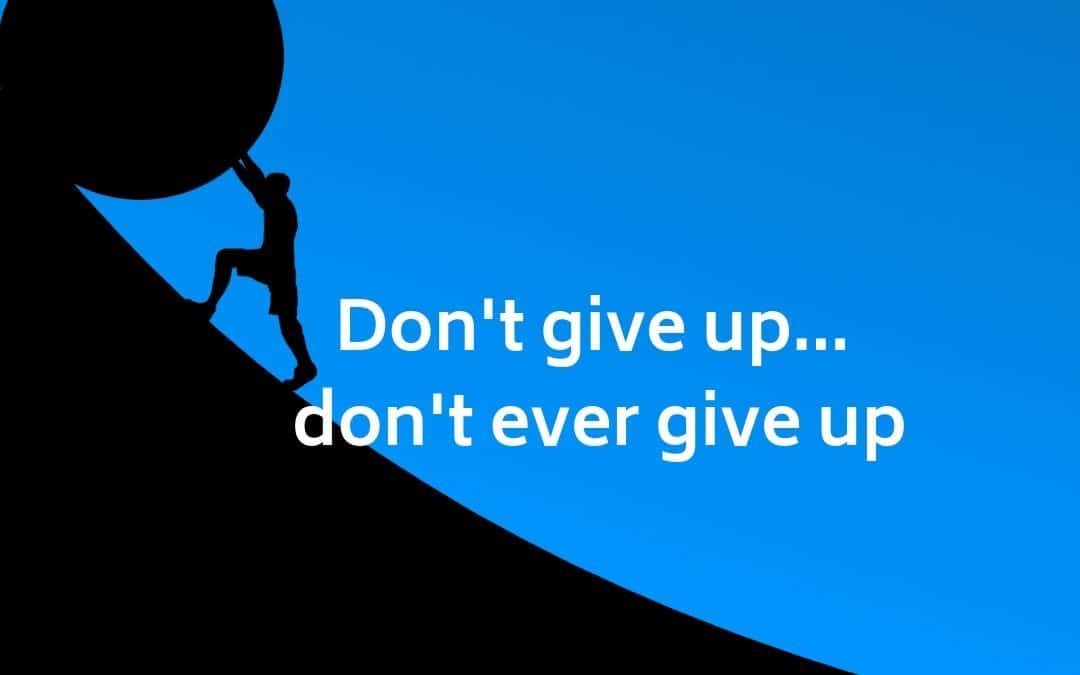 We all have, at one point, felt like giving up on life. This natural feeling comes to us when we have all it takes to create an idea, business, relationship, or even learning a course or trade. You may have dreams, and may have done the needful to actualize those dreams, but still not sure what your fate is; please don’t give up, you might be close to the finish line.

A great way to stay focused on your craft is by listening to the inner voice inside you. It’s normal for people not to believe in you, it is normal for even your family, close friends, or potential sponsors not to believe in your work, please don’t take it personal. All you need is, stay true to your cause, learn the lesson you need because rejection is part of the process.  Eventually, when your determination pays off, you may be surprised to know that the same people who neglected your work are the same people who will be your cheerleader when you succeed. They might even be kind enough to mention your works to captains of industries.

In the journey of life, many people will try to discourage you. Some will even mock your ideas as crazy. However, as human beings, we are all born with natural instincts to adapt and survive. Just like little babies always cry for milk when they are hungry until they are properly fed, the same way we have to stay hungry until we get what we want.
You may have failed a couple of times, and even get tired of failing, but then you have to understand failure is part of the learning process.
No great man arrived where they are today without experiencing failure. According to Michael Jordan “I’ve failed over and over and over again in my life and that is why I succeed.”  A great example of a champion who failed and never gave up until he succeeded was Abraham Lincoln. Lincoln was a champion and he never gave up. Here is a sketch of Lincoln’s road to the White House:

So what’s your reason for giving up? The best things in life are the most difficult to get. In order for you to succeed, you must have a strong tenacity. Talent no doubt is great, but without tenacity, talent won’t get you very far. I have received compliments about my writing skills. Some have said that I am a talented writer, but I do know that I put in so much work to produce good content. I am also aware of the fact; I was once a horrible writer and still learning the art of writing. The question now becomes, how do you stay focused when the odds are against you?

Know Your Gift
Every human being has a gift. Your gift will announce you where your skill can’t take you. The world is in dire need of your gifts and talents. When you give up, you give people the opportunity to conclude about your personality. Refuse to give detractors the edge to have an opinion about you.

Believe in Your Dreams
Even if no one believes in you, do yourself a favor by believing in yourself and your product. There have been millions of dreamers before you, and if they had given up, the world would not have been the same.

You Have Everything You Need
It is normal for people to say the system is structured against them or they are victims. I personally don’t subscribe to the victim mentality. I agree some people might have a privileged background or opportunity, but I strongly believe that if you are able to think out of the box, you’ll know that everything you need to succeed is around you. Victim mentality will always try to find why each and every successful individual is lucky. If you think, the odds are against you, just know that there are people out there who have much bigger problems.

Let’s see examples of great minds who rose above victim mentality and succeeded
Mark Cuban was a bartender at 25, Harrison Ford was a carpenter at 30; the founder of 5Hour energy drink was a taxi driver at 30; the author of Harry Potter was a mother on welfare at 31; the Founder of McDonald sold the paper cups at 52!

You Inspire Others When You Succeed
When you succeed like Abraham Lincoln, you inspire others with your story, but most especially you tell people their dreams are valid and it’s normal to feel in a certain way.
Success is failure turned Inside Out
Sometimes when some people fail, it is because they have not done their homework very well. A critical point to note is that we all need maturity and time in whatever we do. You might do all you need to do, but if the timing is not right, you won’t get any further. Maturity entails meeting the right person, learning the rope, and being at the right place at the right time.
The key here is to simply take time out for deep self-reflection. Reflect on your situation, focus on solutions and work on finding answers that you may not have been aware of before.
In conclusion, I will leave you with a list of some people who didn’t give up. They are Jack Ma, Oprah Winfrey, Walt Disney, Jay Z, Henry Ford, Henry Ukazu among others. Feel free to add yours.

Henry Ukazu writes from New York. He works with the New York City Department of Correction as the Legal Coordinator. He’s the author of the acclaimed book Design Your Destiny – Actualizing Your Birthright To Success and President of gloemi.com. He can be reached via info@gloemi.com
Elevate Your Game
Don't Allow People's Perception Define You
Fret Not, That Set Back Is Your Set Up for Success