The Success of Failing 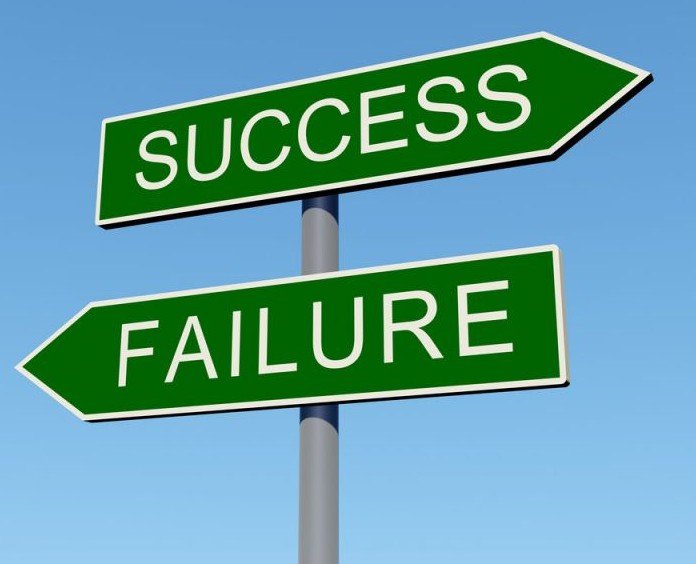 Success and failure are terms used to describe how we did at a particular event in our life events, not people, not how we are in totality.

Failure comes in different stages of life. Though some people might say they passed their exams on the first attempt, accomplished success in their first year of business or even made great impacts due to their great advisors and mentors, and research they did. Great minds only know too well that in the journey of life, failure is a necessary component of success.

Failure and success mean different people to different people and they react differently. Some people take failure personally; these set of people see it as a permanent situation and give up, and there are people who use it as a lesson; they do not take it personally but as a temporary setback.Just like you won’t value a good man/woman until you lose him/ her to another woman/man, the same way, you can never appreciate success unless you have failed. Failure humbles you.

We have all failed in several capacities in life. While some people fail and wail, other rational minds will fail and pick up the lessons. Failures come in different shapes and sizes of life. Failure can come to you in your early or late years of marriage, business, careers, and life.

It’s quite unfortunate to know that many people don’t know that failure can prevent disaster in their life. For instance, won’t you prefer leaving an abusive marriage than dying in the marriage? Wouldn’t you like to experience betrayal or fraud from a friend than to lose a fortune that will cost you all you have labored in life?

That goes to tell you some failures are a blessing in disguise.As human beings, we are scared of failure. These failures arise as a result of phobia or the fear of the unknown. We fail to understand that when we embrace or face our fear, there’s a probability of succeeding.

According to Dr. Yomi Garnett a Life Coach "it’s impossible to evolve into your full potential unless you face adversity and learn from it. Life’s great victories come from overcoming defeats and setbacks. May your own road be rough enough for you to profit from the portholes and narrow bridges".

The sad part of life is that many people don’t recover from their failure, they allow their failure to define them, and they blame it on circumstances. The good thing about failure is that you can turn your mess into a message, you can make your fate your faith, you can turn your pain into pleasure, and your disappointment into an appointment if only you are able to think out of the box.

The advantages of failure

Failure is life’s greatest teacherYou are probably familiar with the saying. Experience is the best teacher. This is because the wise man learns from his mistakes, but the wiser man learns from other people’s mistakes. Failure will humble you.

According to Ralph Heath “The quickest road to success is to possess an attitude toward failure of ‘no fear’ Failure will teach you a life lesson you won’t forget in a haste.”

When you fail well, life will show you the reality of life. One key lesson in failure is that it shows the kind of person you are. That’s why it is always said “never let success get to your head, and never let failure get to your heart.

Just to understand the practical nature of failure and success. Imagine a newborn baby. When a baby is first learning to walk, he/she is going to fall down many times. This, in fact, is a failure, but as time goes time the baby’s leg will be strong and he/she will be able to work well without staggering.

Why It is Necessary to Fail

The knowledge you will gain from failure  can be harnessed in the future to overcome that very failure that inflicted so much pain in the first place. Nothing can replace the knowledge gained from failure. When Thomas Edison famously failed nearly 10,000 times to create a commercially viable electric lightbulb, with each failure, he gained the knowledge of just one more avenue that didn’t work. It was the accumulated knowledge developed from nearly 10,000 failed attempts that ultimately led to his success.

One of the true test of failure is resilience. This is because resilience goes a long way to show how passionate and eager a progressive is eager to push. In order to achieve great success, we must be resilient. Because, if we think that we’re going to succeed on the first try or even the first few tries, then we’re sure to set ourselves up for a far more painful failure.

According to Marilyn Monroe “Just because you fail once, doesn’t mean you’re gonna fail at everything. Keep trying, hold on, and always, always, always believe in yourself, because if you don’t, then who will, sweetie?”

Failure helps us to grow in life. When you fail at a particular task, the knowledge and experience you will gain will make you strategic in planning. The good thing about this type of failure is that it makes you grow.

When we see successful people celebrating their business, marriage, academic achievement, or event career, it will be good to ask them about their failures and how they were able to come this fear. When we fail, we grow and mature as human beings. We reach deeper meanings and understandings about our lives and why we’re doing the things that we’re doing.

Do you know that failure can be an asset? Imagine a divorcee, politician, or businessman sharing their mistakes with the world. Many people will pay to listen to them because they have practical insight based on their experience. The value of life lies at the heart of success and a lack of value is a fundamental pillar to failure. To appreciate value, write out what you failed at and why you failed? What could you have done differently? How will you tackle those failures in the future when you’re faced with them? How will you learn from the past to help shape a bigger and brighter future?

How to Recover from Failure

When you fail, surely there will be the people telling you, “I told you so,” Ignore those people. Ignore the naysayers. Be glad you showed up and learned one of two things.

Understand that it’s Okay to Fail

Each failure is simply feedback on how to perfect your craft. Know that nothing works unless you act. According to Arthur Jones, you can’t teach anybody anything, success comes from good judgments. Good judgment comes from experience. Experience comes from bad judgment”.

In conclusion, as you go through the journey of life, fall and stand gallantly because that’s one sure way of succeeding in life.

Elevate Your Game
Don't Allow People's Perception Define You
Fret Not, That Set Back Is Your Set Up for Success